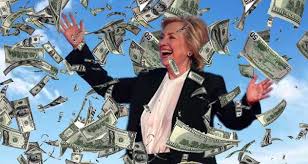 Watching the selection process for the Presidential Candidate of the Democratic Party over the last few days leaves me wondering. Who are we electing anyway? The leader of the free world or the head fundraiser of the party, and should that person be the same person?

Many in the Democrat camp this week have circled the wagons around the talking point that Bernie Sanders does not deserve to be the Democratic candidate for the presidential race because he has not raised enough money compared to Hillary Clinton for down ticket candidates. In case you are not familiar with the term, down ticket candidates are those who are running for office in the Senate, House of Representatives, and for state elections. Where I do agree that winning down ticket races is an important part of standing up to the shortsighted and irresponsibly bad written laws coming from the Republicans lately; I don’t think that the president should also be the head Party fundraiser.

While Bernie Sanders went to participate in an economic conference hosted by the Vatican discussing a moral economy, Hillary Clinton went to actor George Clooney’s house for a fundraiser that in Clooney’s words raised an “obscene amount of money.”

As I have shared this idea that head fundraiser and the president should not be the same person with those in my social media circles, I was told more than once that I just don’t understand how things work. To that I answer I do understand how things work, however the way things work isn’t working for millions of people in the United States and to not even try to do something differently to see if it works better makes no sense to me.

It seems to me that the way that candidates are forced to make the ask for money for the Party places them in a vulnerable position. The party is supposed to be doing the fundraising work, which ought not be a major problem if the candidate they are supporting is good at her/his job. I think a great deal of the problem is that many candidates have not been servants of the people that they wish to have vote for them in elections. That is why they need to spend so much money to get their name out to the people and share a common narrative that they think the people will buy. I would argue that that is not the way it should work. I am old-fashioned however because I believe a voting record of a candidate or the previous works of service that they are known for should do the talking, that should be enough to fundraise from.

The strategy of fundraising from previous work will not be a successful strategy to market to the richer crowd who only want to buy favor with the winner. However, it will work to market to Main Street and those who understand the vision that the candidate is selling to win the Election.

It is irresponsible to make the candidate running for president the same person who is responsible for raising the money for the party. The members of the party should step up and do their jobs and leave the job of interviewing to be the leader of the United States to the candidates.

Make a comment. Let your point of view be heard. Cancel reply